President Joe Biden on Thursday said there will be food shortages around the globe because of Vladimir Putin’s invasion of Ukraine.

‘It’s going to be real,’ he said. ‘Because both Russia and Ukraine have been the breadbasket of Europe in terms of wheat, for example.’

Food security, along with general humanitarian assistance, was one of the main topics of conversation in Biden’s trifecta of emergency meetings with NATO leaders, the European Union, and the G7. The summits were called to deal with the invasion of the Ukraine.

‘We are in the process of working out with our European friends, what it would be what it would take to help alleviate the concerns related to food shortages. We also talked about a significant major US investment among others in terms of providing for the need for humanitarian assistance, including food as we move forward,’ he said.

Ukraine is a heavily agricultural country with winter wheat, spring barley, and corn as some of its main crops.

The United States, through the Feed the Future initiative, will provide over $11 billion over the next five years to address food security threats and malnutrition across the globe – with programming in many of the countries vulnerable to increases in food and fertilizer prices.

A senior administration told reporters in a briefing on Thursday that Russia’s invasion ‘jeopardizes global food security, particularly for vulnerable populations in the Middle East and Africa’ as farms are being destroyed. 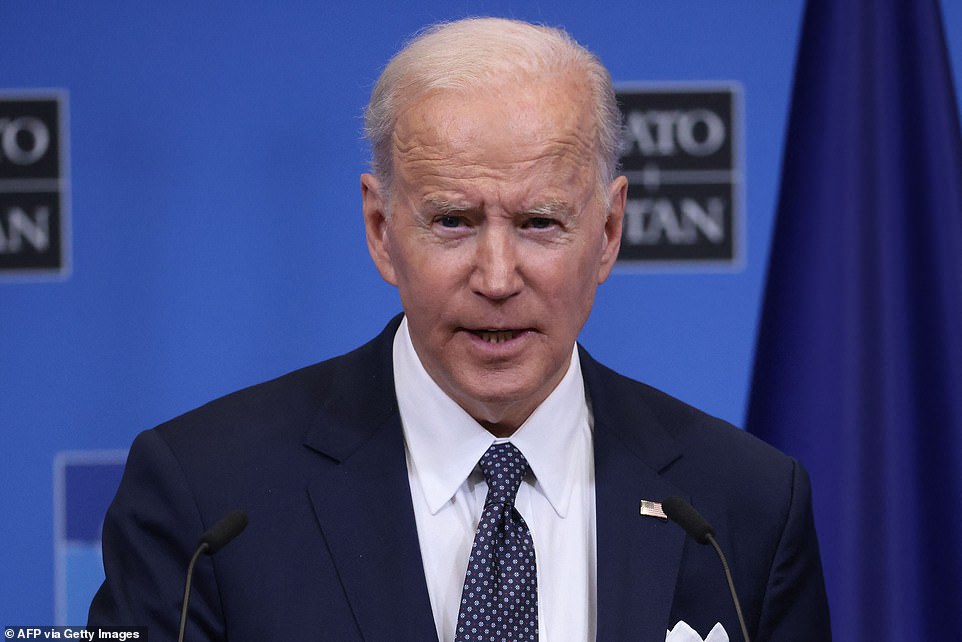 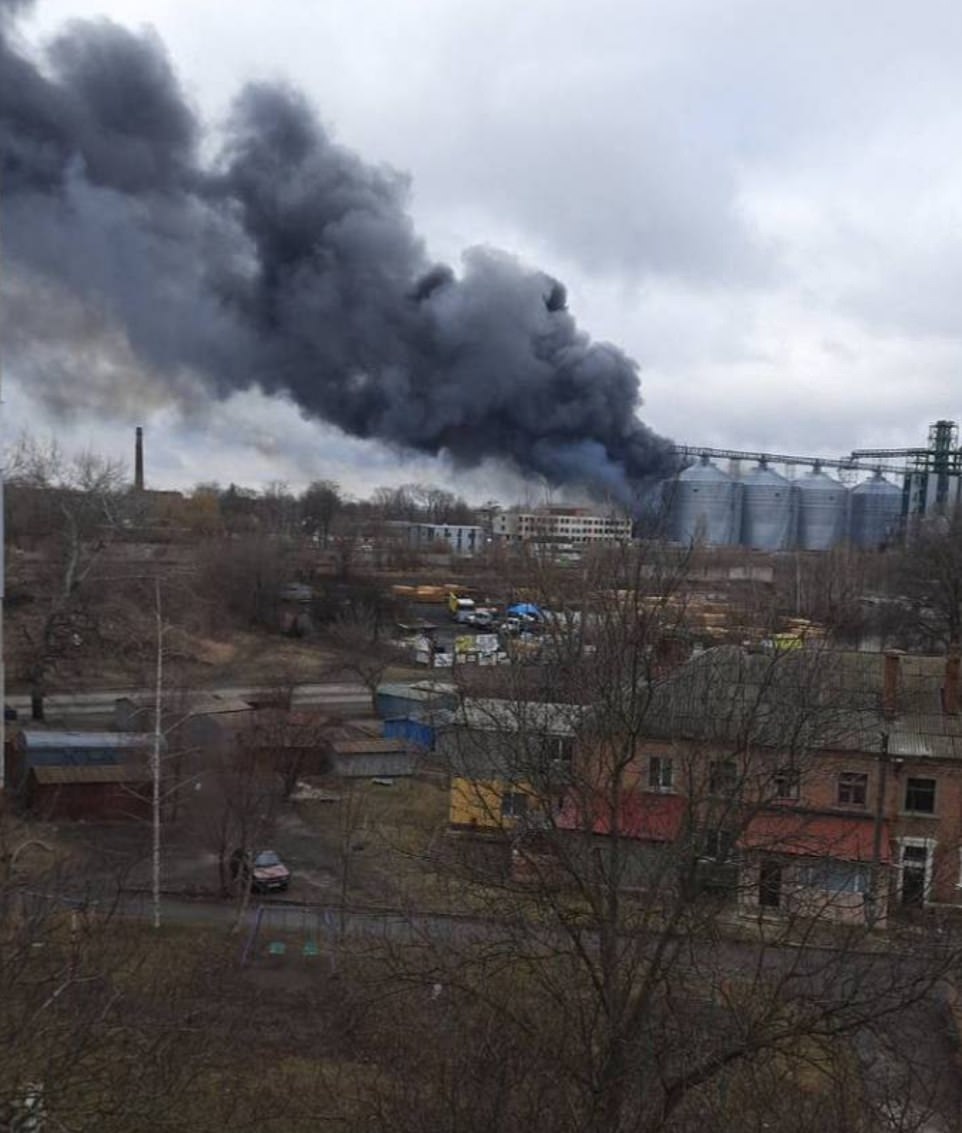 The United Nations International Fund for Agricultural Development (IFAD) warned on Thursday the war in Ukraine is already resulting in rising food prices and a shortage of staple crops in parts of central Asia, the Middle East and north Africa.

The Russian invasion of Ukraine has cut shipments from the two countries, which jointly account for around 25% of world wheat exports and 16% of world corn exports, leading to surging prices for the grains on international markets.

Russia is also one of the world’s largest suppliers of fertilizer – prices of which had already spiked last year, contributing to a 30% increase in world food prices and a related increase in global hunger levels.

The European Union on Wednesday proposed an aid package of $549 million to help food producers in the 27-nation bloc weather the economic impact of the war in Ukraine.

While the EU does not face an immediate food shortage, the region is a net importer of specific commodities, including feed crops from Ukraine. And European farmers are highly dependent on Russian fertilizers to grow their crops.

‘This vulnerability, together with high input costs, such as fertilizers and fossil energy, is causing production challenges for farmers and risks driving up food prices,’ the commission said in its proposal.

The food aid is part of the larger humanitarian assistance plan the Biden administration proposed for fallout from the Ukraine invasion.

That includes that the United States will accept up to 100,000 refugees fleeing the war in the Ukraine, the Biden administration announced on Thursday.

It’s meant to help ease the humantarian crisis taking place in Eastern Europe, where nearly 3.5 million Ukrainians have fled their country bombarded in one of the biggest refugee crises since World War II.

Refugees have flooded into Europe and some have even made their way to the southern border of the United States, trying to enter the country that way.

In addition to welcoming more of the displaced, the Biden administration also announced more than $1 billion in new funding toward humanitarian assistance.

The funding will provide food, shelter, clean water, medical supplies and other forms of assistance, according to the White House. 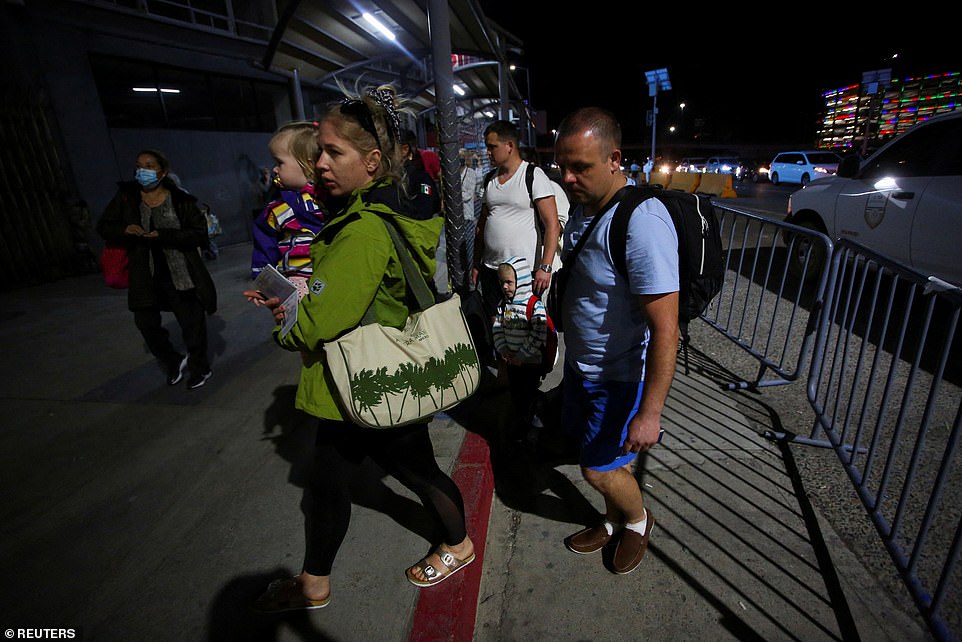 Ukrainians fleeing the Russian invasion of their homeland wait for a US Customs and Border Protection agent before passing through a checkpoint to enter the United States in Tijuana, Mexico 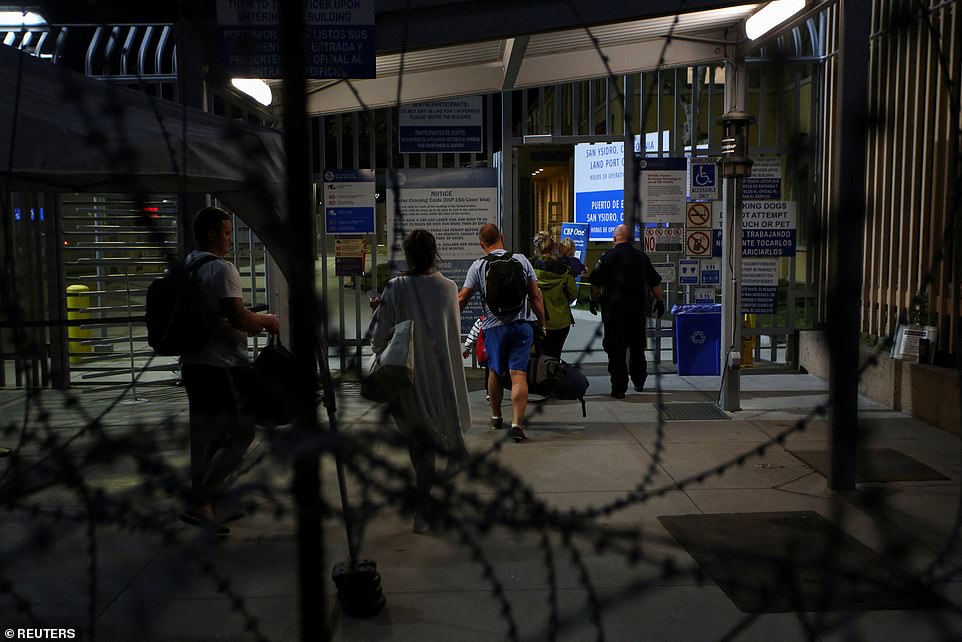 Ukrainians fleeing the Russian invasion try to enter the US through the southern border – the Biden administration announced it will accept 100,000 refugees 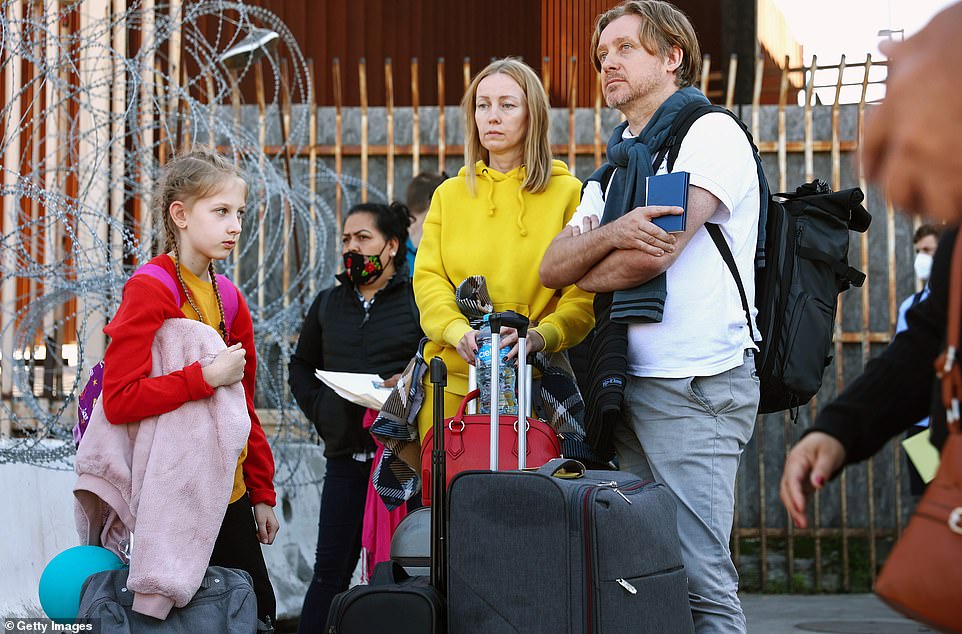 TIJUANA, MEXICO – MARCH 22: A Ukrainian family who fled Kyiv, Ukraine, wait with their luggage before being allowed to cross the San Ysidro Port of Entry into the United States to seek asylum 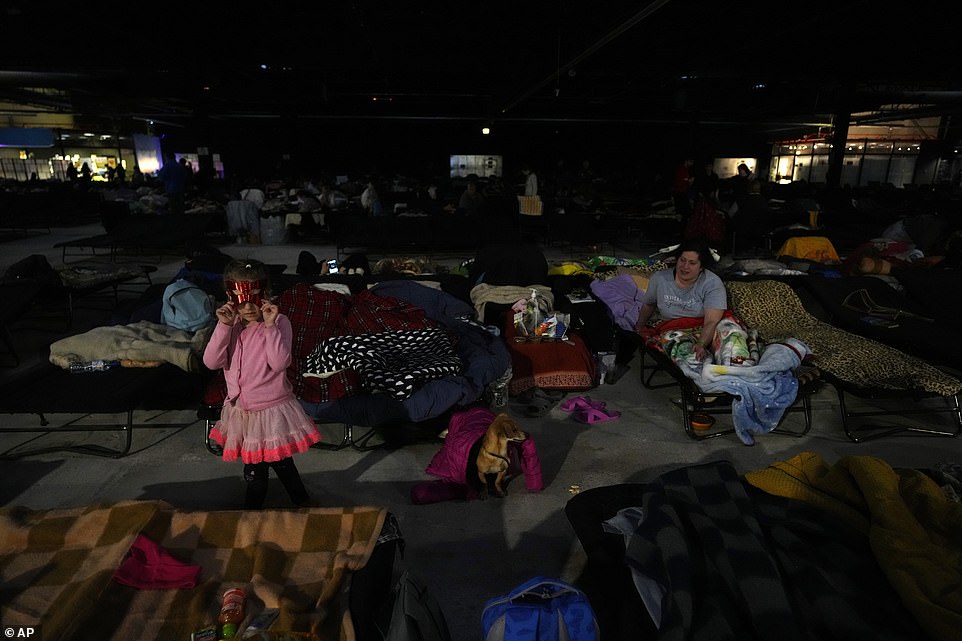 Ukrainians rest at an exhibition hall, turned into a refugee center in Nadarzyn, near Warsaw, Poland – nearly 3.5 million Ukrainians have fled their country 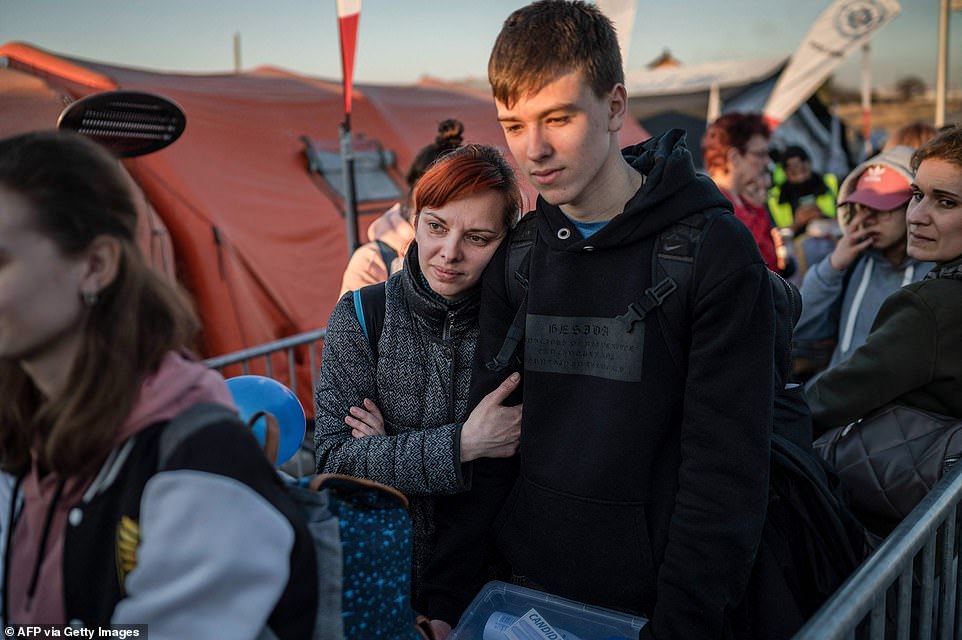 Refugees from Ukraine queue as they wait for further transport at the Medyka border crossing, after crossing at the Ukrainian-Polish border

President Biden will address the refugee situation on Saturday during his visit to Poland.

Poland, which shares an approximately 300-mile border with Ukraine, has taken the majority of refugees – around 2.1 million – but nearby countries Romania and Hungry have also taken in many Ukrainians.

Biden has been criticized for not doing more to help ease the crisis. He has vowed to help.

‘I will welcome the Ukrainian refugees,’ he said from the White House on March 11.

As for the refugees, a senior administration official said the US will focus on Ukrainians who already have families in America and said they expect most Ukrainians will want to stay in Eastern Europe in the hopes they will be able to return to their homes.

‘We’re working in particular to expand and develop new programs with a focus on welcoming Ukrainians who have family members in the United States,’ the official said in a briefing call with reporters.

‘We still expect most displaced Ukrainians, citizens will want to stay in neighboring countries or elsewhere in the in the EU, where they may have family and where there are already large diaspora communities in the hope that they can return home soon,’ the official added.

In order to get around the 125,000 refugee cap, the US will go through the full range of legal pathways, including the US Refugee Admissions Program, others will come on family-based visas or another process known as humanitarian parole.

Precise details on how the refugees will be brought to the States – both legally and logistically – were not clear. 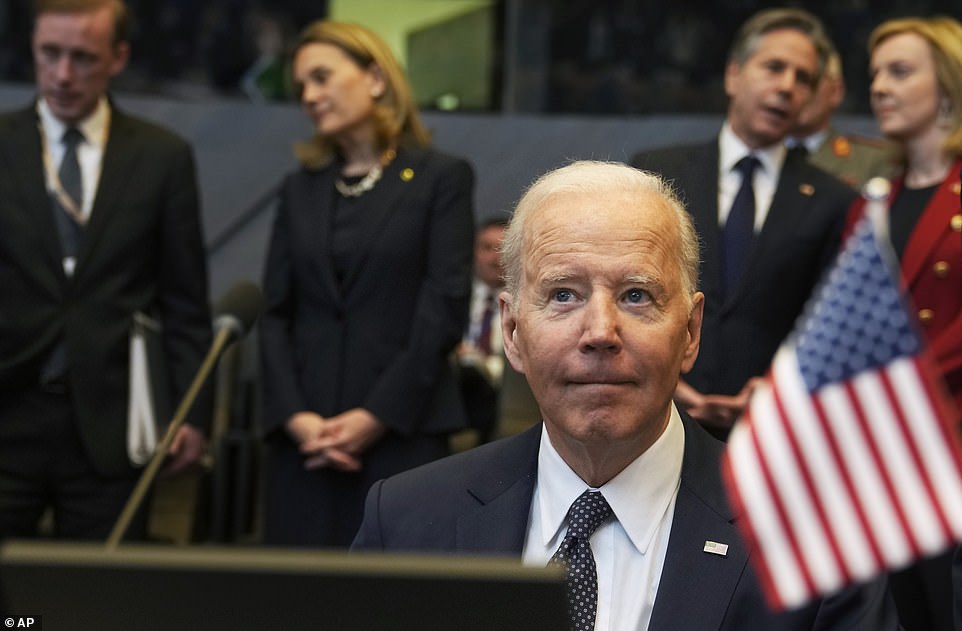 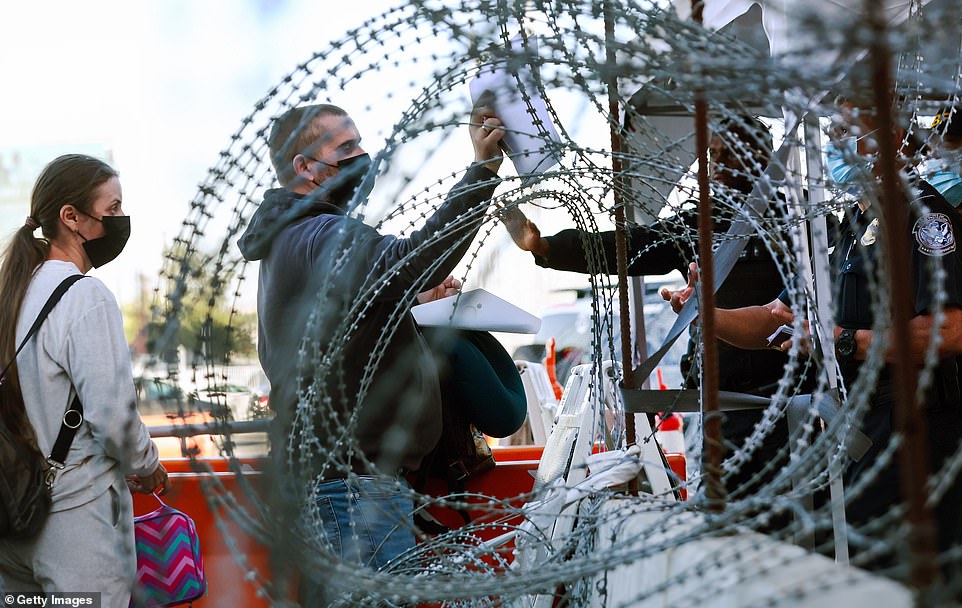 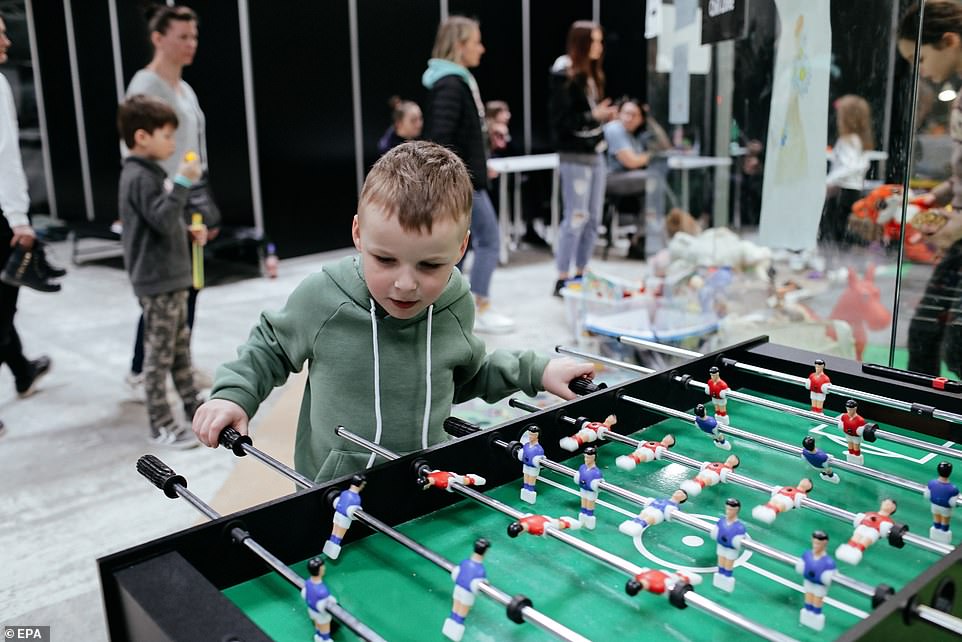 A Ukrainian refugee boy plays at the Humanitarian Aid Center at the Ptak Warsaw Expo in Nadarzyn, near Warsaw