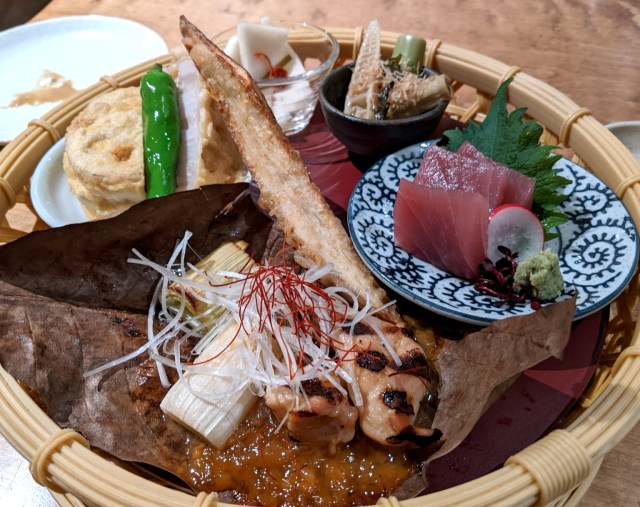 Mr. Sato’s light lunch ended up turning into a feast for the gods.

But neither of those were on the menu today for our resident gourmet expert Mr Satoas he was headed to a restaurant with a taste a little closer to home: Japanese restaurant Aen.

While Mr. Sato, like most of Japan, was very familiar with Mos Burger, this was his first trip to Aen, which has four restaurants around the Tokyo area. Upon further research, it seems Aen has been in business since 1999, with its focus being on dishes featuring brown rice and vegetables — quite different from what’s usually on offer at Mos Burger.

It was around lunchtime when Mr. Sato made his trip to Aen, so he decided to go for the Famous Bamboo Basket Feast Lunch (2,200 yen, US$19.10). He wasn’t quite sure what the lunch set would involve exactly, as the text on the menu was kind of small and Mr. Sato’s eyes, while accustomed to seeing all kinds of bewildering sights, were struggling to read it.

No matter, though! If it’s got “famous” in the name, surely it will be delicious.

Soon after Mr. Sato placed his order though, a server brought out a plate of marinated Chinese cabbage with deep-fried tofu, plus some tofu drizzled in sesame sauce, saying, “Your side dish, sir.”

Side dish?! For a lunch? Perhaps this was an appetizer that would be added onto his bill later, like at an izakaya.

But when Mr. Sato later checked his bill once more, it turned out that this was a free side dish from the restaurant, almost like a warm-up before the main meal.

Soon after Mr. Sato had finished warming up, a salad arrived.

It wasn’t just any old salad either, it was huge! At any other restaurant, the salad alone would easily set you back at least $10 or so, but here it was as part of the lunch set. The salad was called Caesar Salad with Bacon and Crown Daisy and used ingredients from Fukushima Prefecture’s famous Akutsu Farm.

Mr. Sato eagerly devoured the salad, but no sooner had he finished when yet another huge dish was presented to him.

▼ A whole host of delicious looking food in a huge bamboo basket!

▼ Mr. Sato, who had been expecting a light lunch, was starting to worry if he could finish this feast.

The bamboo basket looked less like a plate of food and more like a banquet fit for a king.

Mr. Sato was immediately reminded of the way breakfasts are typically served at ryokan (traditional Japanese inns). Included in the bamboo basket was:

▼ With each individual dish having such a long name, it was no wonder the text on the menu had to be so small to fit everything in.

The whole experience was akin to taking a trip around Japan, with ingredients sourced from prefectures all over the country. And while all of the individual dishes were delicious, Mr. Sato’s favorite was the chicken with magnolia leaves grilled with miso and leek. The magnolia leaves, sometimes called the Japanese cucumber tree, are used to grill the leek and miso and gave off a wonderful aroma.

Mr. Sato also enjoyed the deep fried lotus root, which was almost like a lotus root sandwich. On the inside was some minced meat, and the lotus root was crispy. There was also a hint of yuzu kosho (Japanese citron pepper), which was delicious.

Mr. Sato was feeling pretty full and satisfied, and as the server came towards him, he assumed it was with the bill.

But something quite different came.

▼ Unless this was some newfangled way of getting the bill, of course.

Just when Mr. Sato thought he was done, the server brought yet another dish — this time it was a bowl of brown rice with some grilled yellowtail on top.

It smelled and tasted incredible, and Mr. Sato couldn’t believe he was getting all of these amazing dishes as a part of a lunch.

▼ The yellowtail was grilled in Saikyo miso sauce.

As Mr. Sato finished the rice bowl, put his chopsticks down and gently dabbed his mouth with a napkin, he started gathering his things to leave. As he went to stand up, however, the server arrived once more, this time with yet another dish.

“Here is your dessert, sir,” they said, placing a bowl of green tea Bavarian pudding on the table.

Even though Mr. Sato was more than satisfied with his voluminous meal, he managed to find space in his stomach for the green tea dessert. And with that, his unexpectedly large lunch was finally done.

All in all, Mr. Sato enjoyed his meal at Aen and will definitely go back again in the future. The restaurant has a lot of dishes with brown rice and vegetables, so it’s a great spot to check out for anyone looking for healthy meals, or even vegetarians.

If you’re in the mood for something a little more indulgent, though, Mos Burger’s teriyaki fries might be more up your alley.