Oil dropped at the start of the week on concerns that a spreading COVID-19 outbreak in China will impact consumption even further.

West Texas Intermediate futures fell 3.5 per cent to close below US$100 a barrel. Rising coronavirus cases in Beijing sparked jitters about an unprecedented lockdown of the capital, while Shanghai reported record daily deaths over the weekend. The world’s biggest crude importer is heading for the worst oil demand shock since the early days of the pandemic.

China’s travails with COVID-19 add another source of volatility to an oil market that’s been buffeted by Russia’s invasion of Ukraine. The war has fanned inflation, and the European Union is discussing measures to restrict oil imports from Russia, matching steps taken by the US and UK

Potential demand destruction from China lockdowns “is the number one issue in the market right now,” said Bob Yawger, director of the futures division at Mizuho Securities USA. Demand is down 1.2 million barrels a day since the lockdowns in Shanghai began, and a shutdown of the capital could impact demand even more so, he added. 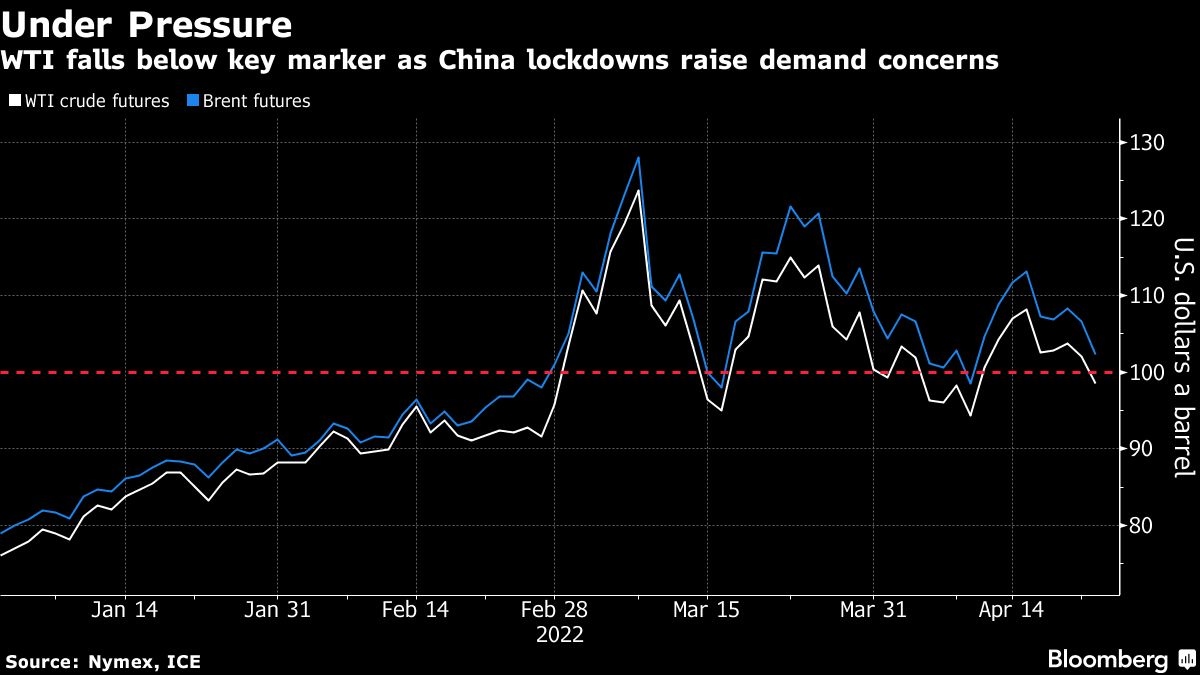 China has implemented lockdowns in a number of cities as it pursues a COVID Zero strategy. In Beijing, the government has expanded testing to 12 districts from April 26-30. China’s oil demand averaged 13.3 million barrels a day in March, according to data compiled by Bloomberg.

The US oil benchmark remains about 35 per cent higher this year, despite recent weakness. The market is poised for additional supply, adding to bearish signs. Libya is expected to resume output from shuttered fields in the coming days, while the CPC oil terminal on Russia’s Black Sea coast has resumed regular operations after one of two moorings damaged in a storm was repaired.