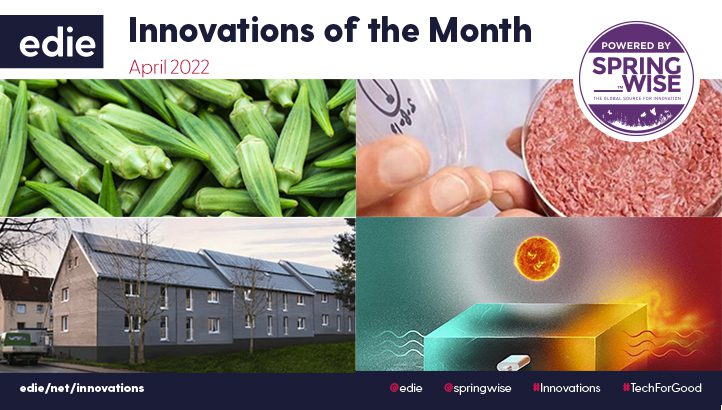 Throughout the fossil fuel era, energy infrastructure has been large-scale and centralized. But in the future, energy generation is likely to be dispersed more widely with smaller-scale solutions. This approach is increasingly being promoted as the rest of the world scrambles to end Russian oil and gas imports. Our first two innovations for April cover decentralized energy systems – one a roof-mounted wind turbine, and the other a system of solar cubes for off-grid electrification.

One of the major challenges for renewable energy is that many renewable sources, notably wind and solar, produce variable outputs and electricity cannot be stored in the same way as a barrel of oil, or container of natural gas. However, this month’s third innovation is an experimental system that can store solar energy for long periods – up to 18 years.

Elsewhere, a German company has developed an innovative and cost-effective process for converting existing buildings to net-zero, while researchers in the USA are using okra to clean microplastics from wastewater.

This month’s roundup also provides an update on cultivated meat and outlines how The Goodyear Tire and Rubber Company—one of the world’s biggest purchasers of rubber—is leading a collaboration exploring the possibility of producing natural rubber from dandelions. 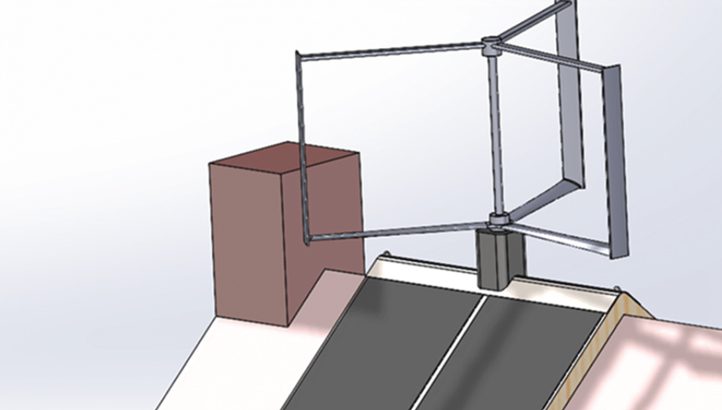 For homeowners looking to power their house with renewable energy, wind power offers a more efficient and environmentally friendly alternative to solar panels. But while solar panels on domestic homes are an increasingly common sight in urban and suburban areas, far fewer houses are installed with wind turbines.

One potential solution to the challenges of urban, small-scale wind generation comes from UK-based engineer Joe Garrett. He has designed a new vertical-axis wind turbine that can be mounted on homes and commercial buildings. The unique design aims to minimize a phenomenon called ‘dynamic stall’, where factors such as wind shear and turbulence place a heavy load on turbine blades – reducing their lifespan. Moreover, the design is simple—reducing maintenance requirements—and offers good power performance.

The turbine is omni-directional, which means it works no matter which way the wind is blowing, and the technology is tailored to work most effectively on pitched roofs. In fact, the shape of the roof enhances the turbine’s performance, acting like an aerofoil to increase the velocity of air going through the turbine. 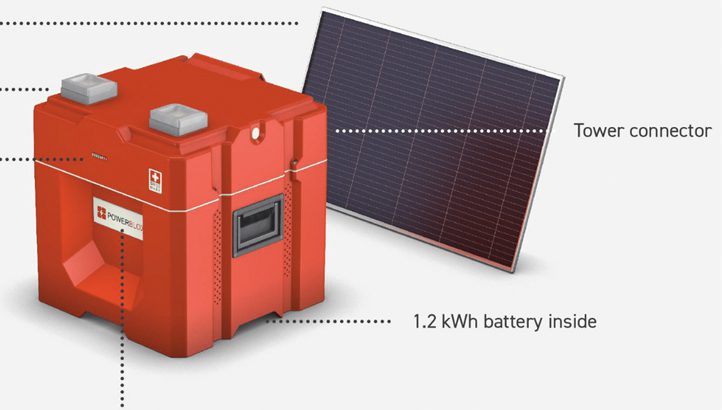 According to the UN, nine in ten people worldwide now have access to energy. However, reaching the final 10% will undeniably be challenging. This is because most of the remaining people without power live in rural areas—largely in sub-Saharan Africa—that are far from any power grids.

Swiss company Power-Blox hopes to revolutionize off-grid energy generation with its fully autonomous power grids that can be used and scaled up by almost anyone. The system is designed to be ‘plug-and-play’ – allowing users to simply plug the system together with no configuration, specific know-how, or maintenance required.

The company’s PBX-200 series consists of intelligent energy ‘cubes’ with an integrated lead or lithium-ion battery – which can be powered by a solar unit or from another external source, such as wind, hydrothermal, or biomass. The cubes are designed to be used like building blocks – when more power is required, additional cubes can simply be plugged in. 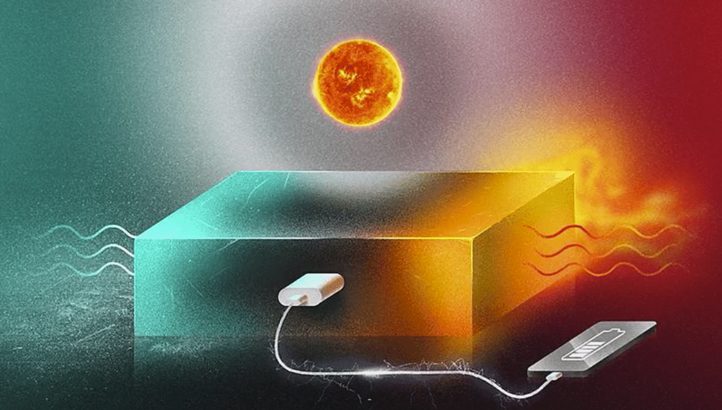 Using a technology developed by Sweden’s Chalmers University of Technology and a generator built by a team at China’s Shanghai Jiao Tong University, researchers have developed a way to store solar power for long durations so that electricity can be provided whenever needed. The new system removes the variability of a power source reliant on time of day and weather – holding energy for up to 18 years.

The technology created by the Chalmers team uses a molecule made of carbon, hydrogen, and nitrogen that changes shape when in sunlight. The altered shape can then be stored in liquid, making the energy usable even when there is no sunshine. For the system to produce electricity, the Shanghai team developed a microchip that produces the catalyst to release the molecule in yet another form.

As a closed energy system, there are no emissions produced by the capture, storage, and release of the solar energy in either form – heat or electricity. 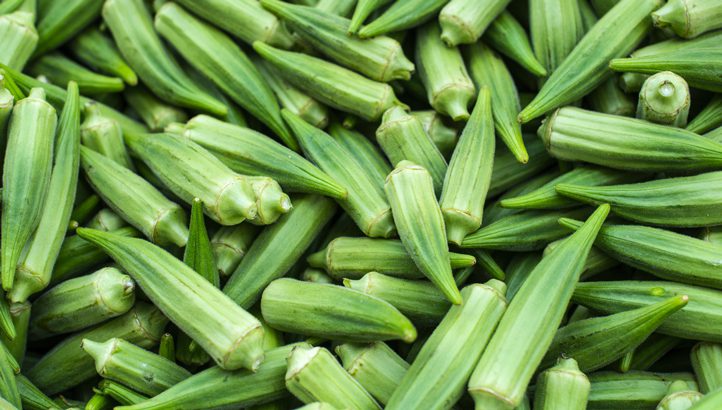 If you have ever eaten gumbo, you may be aware that one of the main ingredients—okra—is an excellent thickener. Researchers have recently discovered that the same extracts that make cooked okra gloopy can be used to remove microplastics from wastewater.

Microplastics are typically removed from wastewater in a two-step process. First, any floating pieces are skimmed off, and then the rest are removed using flocculants – ‘sticky’ chemicals that attract the microplastics and form large clumps that then sink to the bottom of the water. However, some common flocculants are themselves potentially harmful. To address this problem, a research team from Tarleton State University in Texas decided to test non-toxic alternatives. 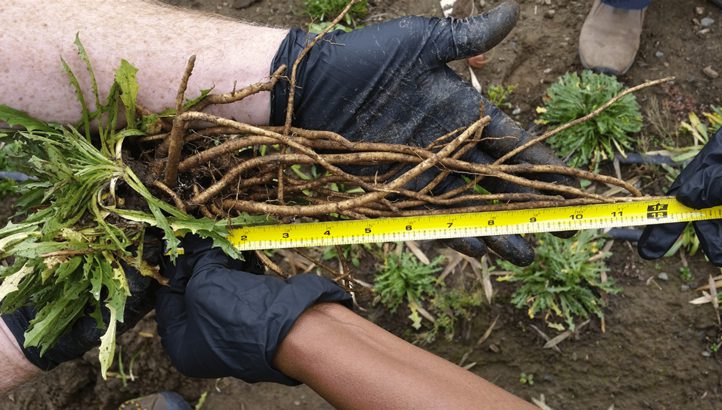 More than 99% of the world’s natural rubber is made from latex derived from rubber trees – almost all of which grow in southeast Asia. Thailand is one of the biggest rubber exporters, and many of the two million rubber farmers in the country earn as little as $6 a day. Many rubber companies use unsustainable methods and have engaged in corruption, deforestation, land grabs from indigenous peoples, and human and labor rights violations.

The tire industry uses around 70% of the rubber produced globally each year, and one major purchaser is The Goodyear Tire and Rubber Company. Now, Goodyear is partnering with the US Department of Defense (DoD), BioMADE, the Air Force Research Lab (AFRL), and Farmed Materials to develop a domestic source of natural rubber in the US.

The program will focus on developing Taraxacum kok-saghyz—a species of dandelion also known as TK—as an alternative to natural rubber trees. While it takes rubber trees around seven years of growth before the latex can be harvested, the TK dandelions can be harvested every six months. They can also be grown in a more temperate climate. 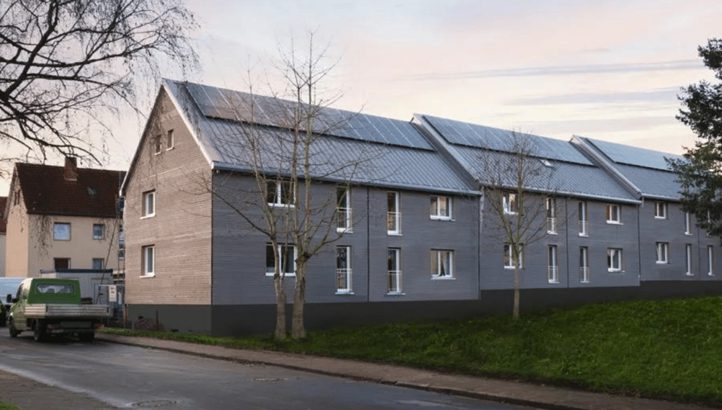 A major challenge on the road to net-zero is the need to convert existing buildings. In Germany, where buildings emit 30% of all CO2 emissions, 30 million apartments need to be renovated to reach net zero by 2050. It is not possible to replace all existing structures with purpose-built net-zero buildings, but, in many cases , it is also not viable to add elements such as insulation or heating pumps to older buildings.

In response, German startup Ecoworks is tackling this problem from the outside. The company has developed a second skin with built-in insulation designed to help buildings radically cut energy use.

Ecoworks begins with a 3D scan of the building, which is used to create a digital twin. Using this twin, the company develops plans for panels which will fit over the existing walls. Robots assemble the panels off-site, which can then be rapidly installed by skilled workers, completing the project in a few weeks. 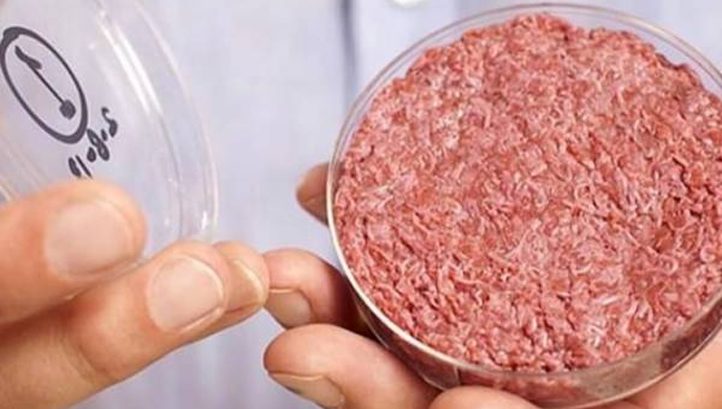 Back in 2021, the edie team identified lab-grown meat and fish as one of the biggest green innovations to watch. Lab-grown alternatives have the potential to minimize food’s carbon, land and water footprint and to mitigate animal rights concerns. At that time, Singapore’s food regulator had just approved the world’s first lab-grown meat for public sale – chicken bites to be sold via Just Eat.

Another innovator in this space is Meatable, a Dutch company staffed by experts in molecular biology, tissue engineering, chemistry, food science and bioprocess development. After showcasing its technology and its cultivated pork sausages at the Consumer Electronics Show in 2020, the firm is hoping to open a pilot production plant this year and to begin stocking products at retailers from 2025.

The Meatable team claims that its technology, called ‘opti-ox’, can produce meat in just a few weeks. The production method involves growing meat from a single stem cell – either from a pig or a cow. Fat and muscle are grown in portions that emulate popular cuts of meat.

Springwise is the global innovation intelligence platform for positive and sustainable change. With a growing database of 11,000+ innovations, we are the place of record for innovation that matters. Springwise.com.

© Faversham House Ltd 2022 edie news articles may be copied or forwarded for individual use only. No other reproduction or distribution is permitted without prior written consent.