IN recent years, a growing number of people have given up meat and dairy products in favor of a vegan diet.

Restaurants and takeaways have sprouted up to cater for the new healthy eating passion.

Even fast food giants such as Greggs and McDonald’s have their own range.

However, one Johnstone man pioneered a vegan diet more than a century ago – long before the term had even been invented.

Dugald Semple, born in 1884, was also an early exponent of vegetarianism and communing with nature.

In his case, that meant living rough and off the land, in a style that modern-day adventurers such as Bear Grylls would surely admire.

Now a leading academic, Dr Steven Sutcliffe, is planning a book about Semple’s life and is appealing to readers of The Gazette to share their memories of him.

Dr Sutcliffe, 61, says that, like many Scots, Semple is celebrated more abroad than at home.

At one point, he could count Indian leader Mahatma Ghandi, who he met in London in 1931, as a close friend.

In later years, Semple did speaking tours of the USA, Canada, India and Europe to promote his best-selling lifestyle books and even had his own radio show.

Dr Sutcliffe, who lectures at Edinburgh University’s School of Divinity, said: “Dugald Semple deserves to be far better known and I would be pleased to hear from anyone who remembers him.

“He was a controversial figure in his day. He was a founder of the Vegan Society in 1944 but had been a vegan long before the term was coined.

Dugald was also a prolific journalist, photographer, conscious objector and an early exponent of a simpler life and wholefoods.

“In his time, he was very well known, both in Scotland and abroad, but has been largely forgotten in recent years.”

Semple’s upbringing could not have been more traditional.

His father, Robert, owned a tailor’s shop in Johnstone’s High Street and was an elder at the town’s High Kirk. 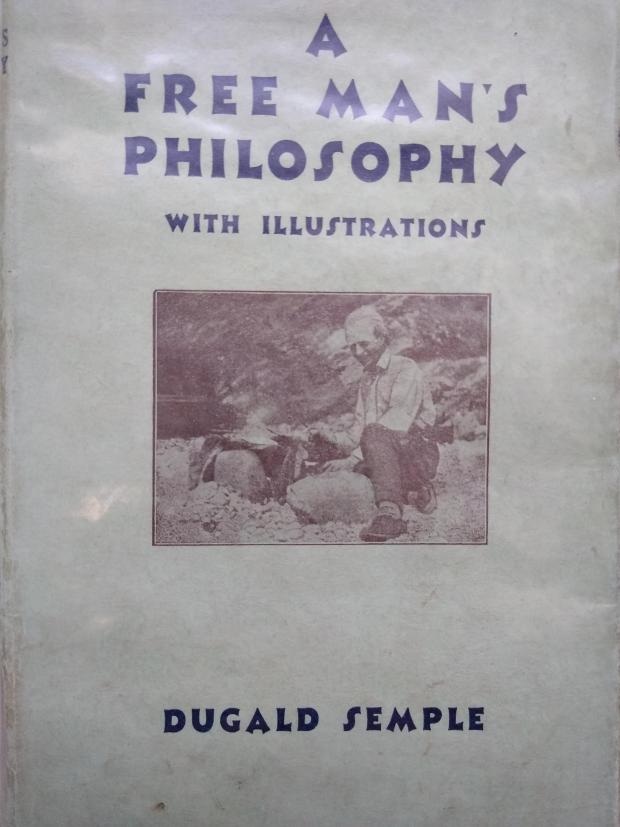 After leaving Paisley Grammar School, Semple worked as an engineering draftsman but soon discovered that the job was not to his liking.

His boyhood had been spent roaming the Bluebell Woods and studying flowers and wildlife on the banks of the Brandy Burn, between Foxbar and Elderslie.

His urge to live a simple life was so strong that, in 1907, he pitched a tent on Linwood Moss and cooked his meals on a pot suspended on three poles over a fire.

Linwood Moss, which later became the site of the ill-fated Hillman Imp factory, was then a nature paradise.

Dubbed by the Press as ‘the Hermit of Linwood Moss,’ he attracted large crowds of sightseers to his tent.

Semple then bought an old horse-drawn bus, which he converted into a caravan home, and moved to Bridge of Weir, near the River Gryfe.

He worked as a journalist for much of his life, publishing in various newspapers, including The Gazette, and often accompanying his columns about the natural world with his own photos.

In 1912, Semple stated that he did not believe milk and eggs were natural foods for man, adding: “Eggs were meant to produce chickens and not omelettes; and cow’s milk is a perfect food for a calf but most assuredly not for a grown-up human being.”

His writing and popular public lectures promoted the idea that a simple life and healthy diet were the routes to happiness.

Semple gave up meat and dairy products in his early twenties, restricting his diet to vegetables, cereal, nuts, fruit and potatoes.

He believed raw food to be the natural diet of human beings and was one of the first to link increased meat consumption to cancer, kidney and liver disease and poor mental health.

In 1916, Semple was conscripted to fight in the First World War but, being a pacifist, he refused and was facing imprisonment.

However, the authorities decided they could put their unique skills to better use.

At the time, there were massive goods shortages, particularly fresh meat, so Semple was instructed to give lectures to housewives on food economy and how to make tasty meals from vegetables.

Between 1930 until 1950, he lived in a cottage in Beith, Ayrshire, growing fruit and studying nature, and was also an outspoken critic of tea and alcohol.

He went on to become president of the Scottish Vegetarian Society and is credited with co-founding the vegan movement.

Semple was often called a crank but always responded by saying that the crank was the most important part of any machine.

Semple’s wife, Cathie Amos, had died of heart failure in 1941.

They had no children, although Cathie had a son, Ian, who was killed in the First World War.

The graves of both Semple and his wife can be found in Lochwinnoch Cemetery.

“He wanted people to be able to eat healthily and ethically in a way that they could afford and for the greater good of society.”