ALBEQUERQUE, NM — For the first time in 3 years, the Gathering of Nations Pow Wow was an in-person event, bringing together thousands of dancers, singers, artisans and families from across Indigenous North America.

The annual event also saw the crowning of the new Miss Indian World. Tashina Red Hawk, 18, from the Sicangu Lakota tribe of Rosebud, South Dakota won the title, beating out 22 other contestants from around the USA and Canada. 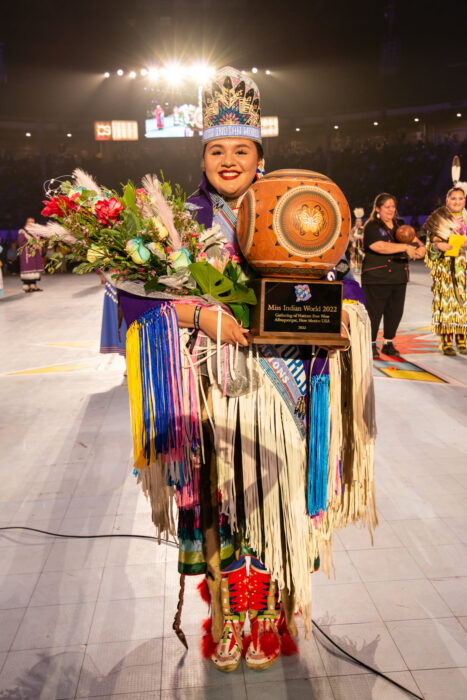 In addition to taking awards for best essay and best personal interview — Red Hawk sang a Lakota song, discussed beadwork and horse culture and did a bow and arrow demonstration for her traditional talent.

Red Hawk will serve as an ambassador for Indigenous nations throughout the USA and Canada.

The Pow Wow was a flurry of dance contests, honor songs and performances by indigenous talent.

The event was celebrating it’s 39th year with three days of singing and dancing competitions that typically would see about 80,000 visitors descending upon Albuquerque and brings in an estimated $24 million dollars of economic impact to the city.

The pow wow also sees positive economic impacts for indigenous artisans from across the country, who set up at the Indian Trader’s Market.

Organizers estimate that about 3,000 dancers filled the floor this weekend — including representation from 560 tribes from the US and 200 indigenous communities from Canada.