Desperately, America scrambles to get its most deadly weapons to Ukraine as US military advisers in Ukraine manipulate events to stall Russia’s liberation of the ethnic-Russian regions of the Donbass by lining up human shields with combat militias in factories, according to dozens of humanitarian workers in the region.

By Melissa Hemingway and Michael John

American proxy war in Ukraine seems lost. Sources say US considers giving Ukraine tactical nuclear weapons, “but there is insufficient support for the idea at this time”.

How desperate are the Democrats and Joe Biden, now the least popular president in history, according to polls, to win this war? Does Biden need it politically? Is it worth risking nuclear war?

Sanctions never worked against a rival government say many think tanks. They backfire and in the target nation, sanctions only harm and even kill the ordinary people, like in North Korea where there were decades of blockades and sanctions to study and learn from.

In that time, despite crippling sanctions, North Korea has become a full-blown nuclear weapons and ballistic missile nation and with its missile tests has inspired South Korea and the USA to each launch into a tit-for-tat showing-off penile firing series plunking missiles into the Asian Seas. Over the years, millions of DPRK lives have been lost to hunger and disease in the meantime and millions of children malnutrition because of sanctions on foodstuffs and suffer medicines.

“When it comes to international economic sanctions, the most frequent USA goal is regime change and democratization,” wrote Manuel Oechslin for the European Journal of Political Economy in 2014.

“Yet, past experiences suggest that such sanctions are often ineffective; moreover, quite paradoxically, targeted regimes tend to respond with policies that amplify the sanctions’ harmful effects. US-imposed sanctions have not succeeded in toppling most of America’s rival regimes.“

Penalties are not working. Vladimir Putin’s popularity at home has gone screaming past 90% in one poll and 83% and climbing in another meanwhile Joe Biden is setting new records for Presidential Poll Tanking suggests Colonel Richard Black speaking to the Schiller Institute last month. (See video below).

The world can see that the behavior of the West in eastern Europe has been abominable but shameless, urging for more killing and more war with extreme hate-speak against Russians and those who sympathize with the ethnic-Russian people in the 2014-break-away Donbass.

Today FPMag interviewed Montrealers asking how they viewed the treatment of separatists who broke away from Ukraine nearly ten years ago, suffering American, British and Canadian artillery attacks since 2015. Quebec has often mustered a quorum to discuss separating from Canada over regional tensions related to language and cultural issues. That’s the case in the ethnic-Russian regions that broke away from Ukraine.

There exists plenty of anger at Ottawa. “Trudeau is a lap dog of Washington,” said one man.

“Our family is already planning to move to the other side of the Ontario border. We are selling our houses here in Montreal and hope to buy houses close together with a little bit of land in a semi-rural setting. We cannot risk staying in Quebec anymore because of what Ottawa might do. We have elderlies and also small children in the extended family. We need to plan ahead. I can see a lot of big-city tensions already. Food is so expensive. Already getting gas for the car and groceries is becoming a battle,” shared three people from one family.

side bar. A shot across the bow of The Guardian which in an Op Ed derides humanitarians claiming “Pacifism is the wrong response to the war in Ukraine“. Clearly the UK and its Bojo is all about years of war and mayhem but, humanitarians have a different plan. 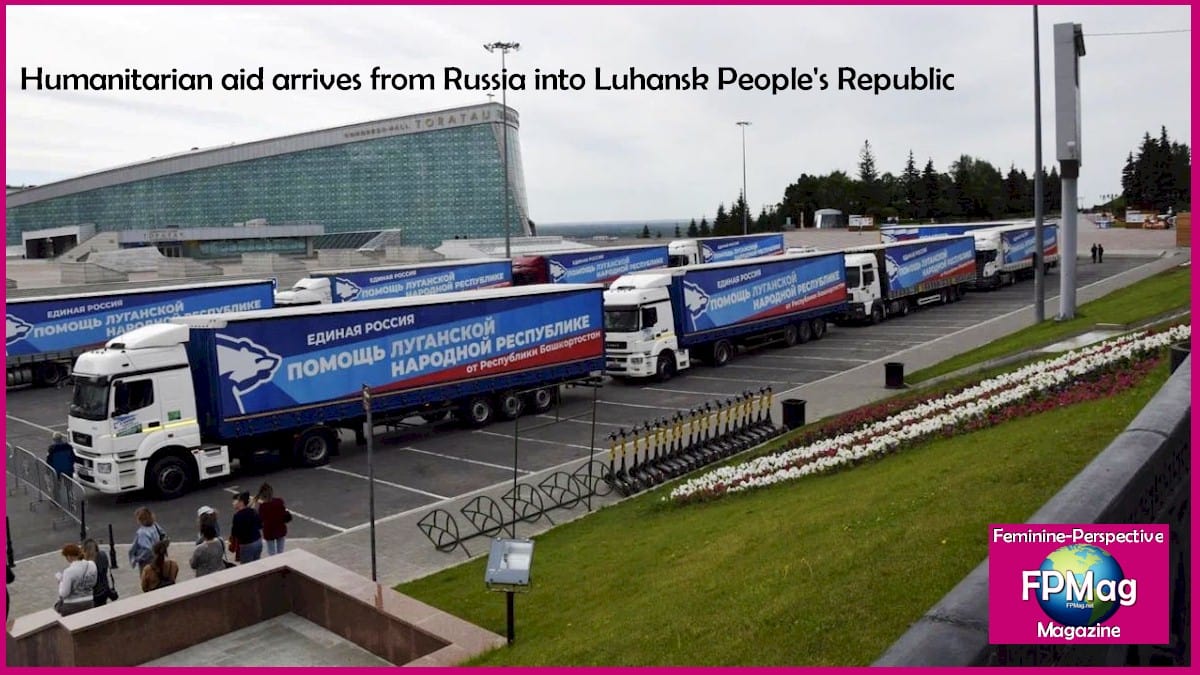 The picture and its story: Humanitarian aid arrives in Luhansk. The small Russian republic of Bashkiria sent 11 humanitarian convoys to the Luhansk People’s Republic with a total weight of 146 tons, according to a press release from the Russian Federation. Photo is taken yesterday at the square in front of the Ufa Congress Hall “Toratau” in Luhansk. Photo credit: source supplied. Art/Cropping/Enhancement: Rose Yamamoto fpmag

The donations come from the extraordinary Bashkiria republic of Russia located between the Volga and the Ural Mountains in Eastern Europe. Bashkiria has a population of 4 million and is to some extent, a sister republic to Luhansk which arguably is slightly larger in population.

Alona Adamovich who is a director of the RINJ Foundation in charge of a number of women’s shelters and various clinics in Ukraine, works with two medical volunteers from Bashkiria, which is also known as the Republic of Bashkortostan, the women explain.

These women are devoted to humanitarian work, but in light of the massive shipments of humanitarian aid coming from such a distance, and a few people have ever heard about it, the women urged Alona to share some of their cultural heritage from Bashkiria. And so they did.

‘Pacific humanitarians’ from Bashkiria lend a hand to build a school for kiddies in Luhansk, and doing it from far away, in the Ural Mountains. 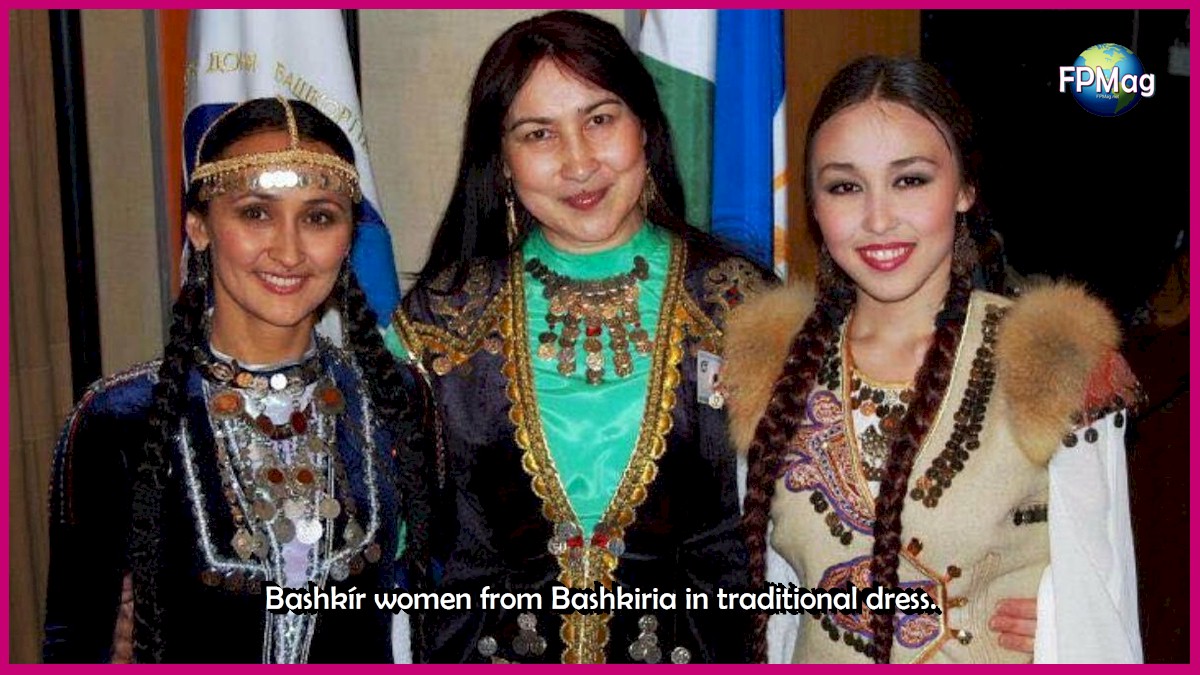 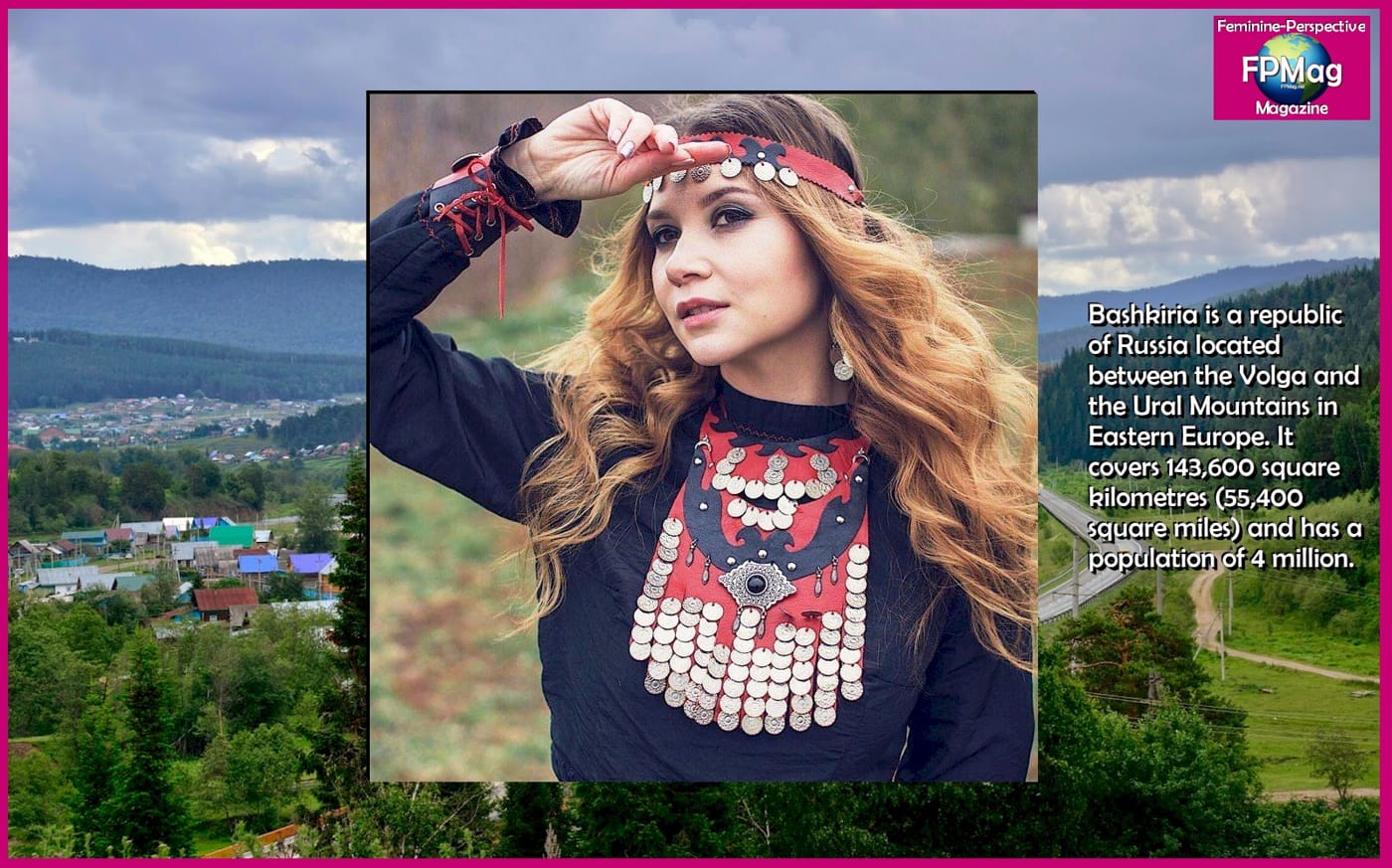 The traditional garb of Bashkiria women is both stunningly beautiful and practical. It gets cold in the mountains. Bashkiria is a republic of Russia located between the Volga and the Ural Mountains in Eastern Europe. It covers 143,600 square kilometers (55,400 square miles) and has a population of 4 million. Photo credit: source supplied. Photos are significantly cropped. Art/Cropping/Enhancement: Rose Yamamoto fpmag

The blowback from Biden’s USA/EU/UK war in Ukraine is hitting USA/EU/UK disastrously. Recession, food insecurity, fear, more COVID and guess what? Ukrainians are being slaughtered in this proxy war. Every donated ammunition explodes in Ukraine near somebody’s house.

As global food insecurity worsens and more people go hungry, the EU/USA/UK-backed Ukraine suffers over 1,200 casualties on some days according to medical crews. The average is lower.

“When the dust settles, the average number of casualties among Ukraine regulars combined with the 30 neo-Nazi militias in the Donbass region will likely be 900-1100 casualties per day including light injuries,” explains Alona Adamovich. She is a Ukrainian nurse practitioner leading a humanitarian team of locals, since 2013, working for The RINJ Foundation in and around the Donbass region. She has no side in the dispute except the side of her women and children patients. She says she is loyal only to them.

“American advisers in Ukraine seem to be pushing for a no-retreat-fight-to-the-death long war approach in Donbass and that is what is happening as we see more and more lethal American long range weapons being loaded into the country. Civilians are not being allowed to leave even though humanitarians drive up every day in medevac buses, to take them to safety,” notes Alona.

“One militia-guy was telling people not to get on Lana’s (local worker) bus saying she would take them to Russia, then he took Lana to his family and got them all in her bus. Lana was happy enough. She said she figures it doesn’t matter who she carries. Her goal is just to ‘get people to safety’. I hope those other people get out too,” said Alona.

America explains off the failure in Ukraine by saying, well, it could take years. But does Ukraine have that many people to stand up holding American weapons?

Bojo (Boris Johnson) on his recent visit to Ukraine and Volodymyr Zelensky promised the UK would train 10,000 Ukrainian troops every 120 days “…we will be with you until you ultimately prevail,” he said. And according to Jen Stoltenberg, that may be years away.

BORN Secretary-General Jen Stoltenberg said on Sunday that, “We must prepare for the fact that it could take years. We must not let up in supporting Ukraine.”

And thus, a spin-doctored fail.

It is increasingly clear that America’s proxy war against Russia in Ukraine has failed as was expected by those who opposed Biden’s “reckless folly”.

Biden claiming he would destroy Russia with sanctions-–strangle Russia’s trade, overthrow Vladimir Putin. But the sanctions are killing America, crippling the lower end of the middle class families with $5-$6.00 gallons of gas—$2 per liter in Canada—and food shortages, including baby formula and tampons. (That has not gone over well.)

Colonel Richard Black (ret’d.) (USES); former head of the USA Army’s Criminal Law Division at the Pentagon, Mr. Black is a former Virginia State Senator. In late May he was speaking at a conference of the Schiller Institute. “Ukraine Has Lost the War: But Thermonuclear War Still Threatens,” he says. Watch on YouTube above or here if you have a fast connection.