Welcome back to FTW’s Beverage of the Week series. Previously, we’ve folded these in to our betting guides, whether that’s been for the NFL slate or a bizarrely successful run through the NCAA Men’s Basketball Tournament. Here, we mostly chronicle and review beers, but happily expand that scope to any beverage that pairs well with sports. Yes, even cookie dough whiskey.

Living in Wisconsin has made me intimately familiar with shandies, the beer-lemonade (or other fruit-based beverage) mix that permeates the summer. This is thanks largely to the constant presence of Leinenkugel’s flagship beer in the Badger State. What started out with lemon has now expanded to roughly a dozen flavors, of which maybe three are any good. I remain bitter that for several years I could get an orange shandy (terrible) but couldn’t find Sunset Wheat anywhere (it is, fortunately, coming back this fall).

This left me sorely lacking in radler knowledge, however, until I made the trip out to Munich for Oktoberfest.

Roughly six days in and in desperate need of hydration, I turned to the half-beer, half-soda mix that’s roughly one Euro more per liter than a Diet Coke on its own. My brain, polluted by a mother who’d grown up poor and simultaneously respecting the restorative “hair of the dog” wisdom passed down to me by an older cousin who only drank liquor from plastic bottles, opted for these hybrids in hopes of nursing my body back to half-speed.

This was a wonderful decision, as the helles/lemon-lime tincture not only restored my ability to form (mostly) coherent sentences but also created a calm port inside a stormy stomach tossed by marzens and a diet made up entirely of sausage, sauerkraut, and doner kebab. I rode that horse all the way through the rest of my vacation in Germany. Then I went to Scotland and had the same exact damn problem courtesy of whiskey because I. Do. Not. Learn.

This left a high bar for Schöfferhofer to clear. While it doesn’t say “radler” anywhere on the bottle/can, the description makes it clear this is a beer/”flavored drink” mix and, since it checks in at 2.5 percent ABV and is German well, yep, that’s a radler.

Schöfferhofer sent me a lovely bouquet of these beer/soft drink mixes for a taste test. Let’s see how they are. 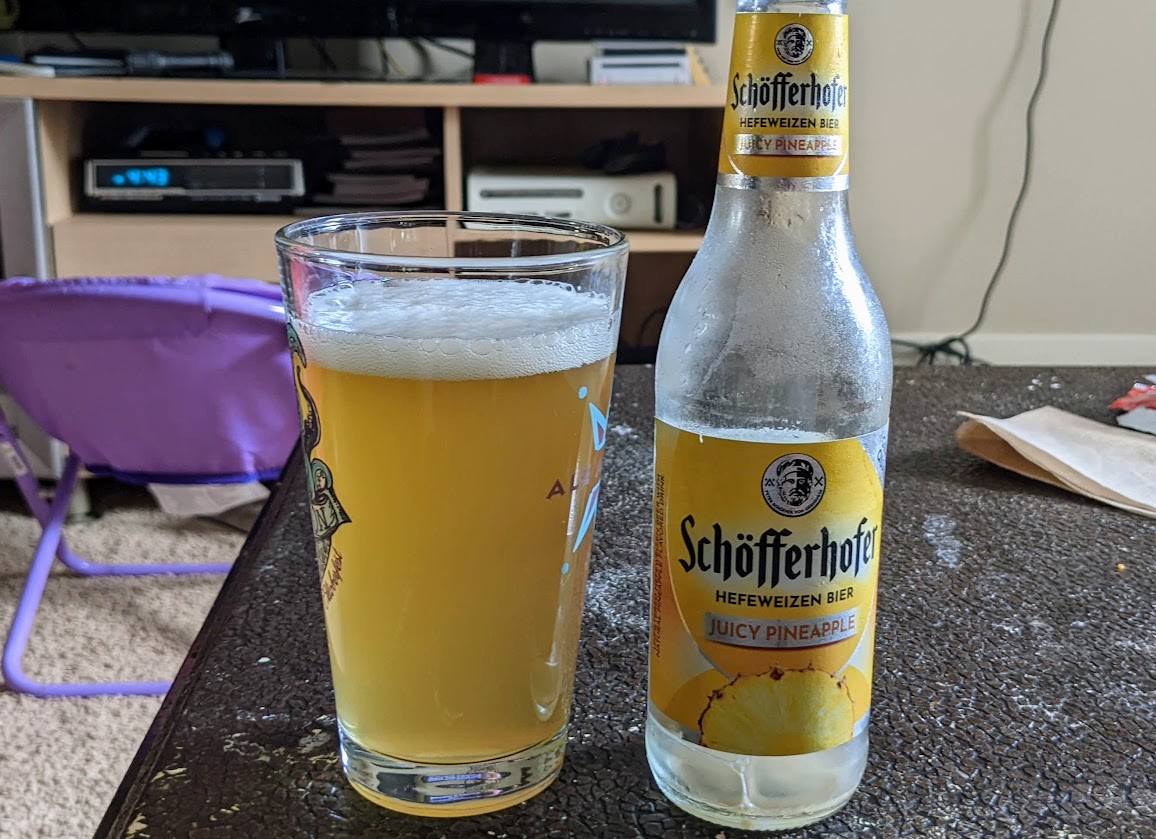 This is the flavor that spurred my sample. It billed in my PR email as a 50/50 combo of real German hefeweizen & pineapple juice, but the label promises “pineapple flavored drink.” This is a phrase that concerns me, but pineapple is an underrated mixer that typically makes most boozes better.

The smell from the bottle is strong and a little skunky. Fortunately, once you get it in a glass it fizzes up and gives off a sweet pineapple scent. It tastes just like it smells; the hefeweizen works great with the fruit-adjacent beverage. The carbonation isn’t as overwhelming as in a hard seltzer or any of the other summer drinks I’ve been plied with this June (not complaining!) but works well to create a clean flavor with a light aftertaste.

This guy is exceptionally drinkable; the pineapple is present throughout but never overpowering or sickly artificial/sweet. The juice (juice?) balances with hefeweizen, a type of beer typically in dire need of an outside fruit to punch it up. Some hefes have a great balance of banana-y clove and provide great flavor, but too many taste like bleached wheat. That makes it a willing canvas for a more potent taste; in this case it’s the Steve Nash to the pineapple’s Dirk Nowitzki.

As expected, there’s very little beer or alcohol taste here until the tail end. This tastes like soda — like someone at the Fanta factory was leaving and decided to experiment on their way out. While I’d love a little more booze in it than the 2.5 percent, especially given what I’m assuming is about 150 calories per 11.2oz bottle, it’s nice to have an outside drink you can have five or six of without having to worry about driving. You’ll probably suffer from a sugar crash before you feel any kind of buzz.

So yeah, pretty good for a hot day even if it’s not going to supply the punch of a hard seltzer that would be similarly easy to drink (not you, White Claw lemonades). It’s not especially beer, so if you’re looking for something strong and German you’re going to be disappointed, though you probably knew that when you saw the fruit on the label. 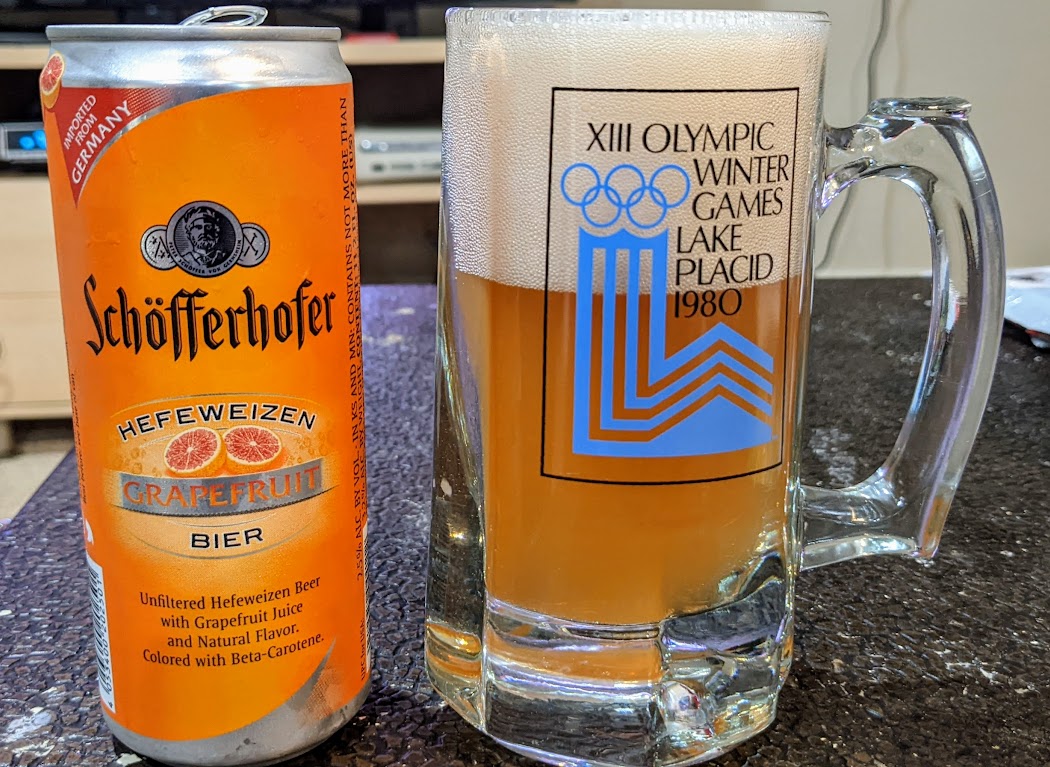 We continue to run down the “slept-on alcohol mixers” gambit here. Grapefruit is a finicky flavor in any situation; there’s a reason why no one eats these large, sad oranges for breakfast anymore. LaCroix’s solution to this problem was to call their grapefruit seltzer “pamplemousse,” which merely makes me hate them more.

Scotterhofer’s crack at the cello of citrus pours fizzy and orange. Very orange. Beta-carotene-colored orange, according to the very front of the can. There’s that classic German honesty at play. I’m not sure they realized the part of the grapefruit you actually eat is an entirely different color, but hey, fine.

It smells 99 percent like grapefruit and one percent like beer, which leads me to think we’re gonna get another blank canvas of hefeweizen and a slightly alcoholic soda.

But no! These two flavors work really well together. The grapefruit is smooth and a little sweet and the wheat of the beer blends seamlessly. The wicked fizz of the opening pour didn’t stick around, but while this is less carbonated than most beers the fruit keeps it from feeling flat.

There’s a lot of citrus flavor here. While it’s neither excessively sweet or sour — the balance here is really well done — I’m not sure how many of these I could drink in one sitting. Which, since these are 2.5 percent ABV radlers, I think would kinda be the point. 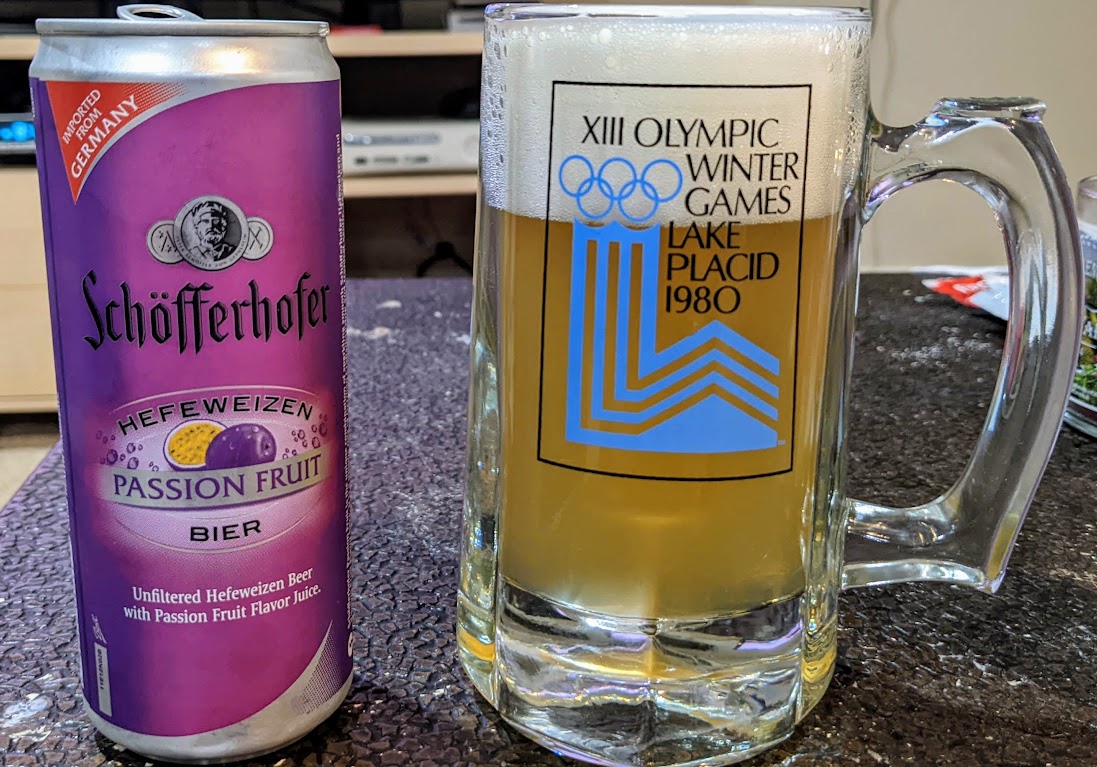 My previous experience with passion fruit is limited to Now and Laters candy. Specifically stale, tooth-chippingly solid ones purchased at a flea market at 10 for a dollar. You’ve got a high bar to clear, German beer.

Like the last pour, the fizz is heavy up front but quickly dissipates. There’s no artificial coloring here, so this fortunately looks like beer.

It tastes sweet and crisp like the last two rounds. The passion fruit balances between sweet and sour like the grapefruit before it. For an unfiltered hefeweizen there’s no sediment settled at the bottom of the can; the wheat flavor again kicks in at the end of the sip, but it’s not overpowering and instead complimentary.

Once again, we hit a familiar conundrum with these radlers. They’re good, but they’re *a lot*. Schöfferhofer went with the opposite of La Croix and crammed these with fruit flavor. The result is more soda/juice than beer, but the cans look cool and they taste better than pretty much every NA offering if you’re looking to drink four of something but keep sober. 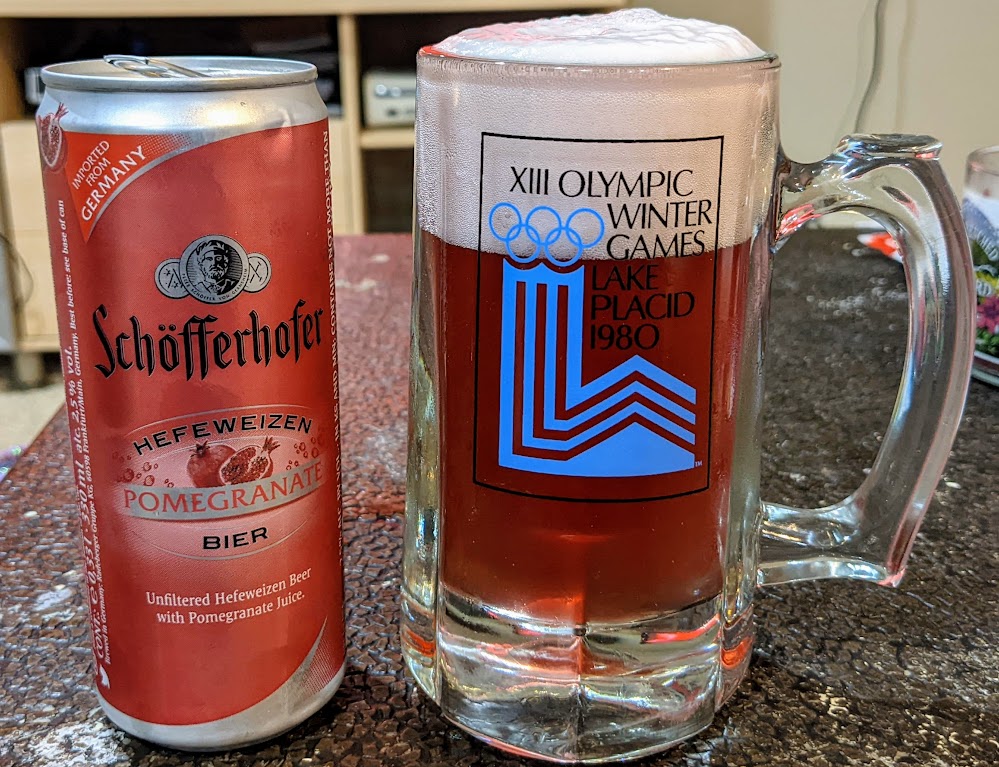 Yep; pours with a big head, but the pomegranate smells a lot like passion fruit. It’s sweeter than passion fruit, but if you put the two in front of me without labels I’m not sure I’d be able to tell you which is which. Do they taste similar, or have I only eaten three fruits in my lifetime? YOU DECIDE.

Ultimately, there’s a little more beer-influenced dryness with this one. That gives it a little more replay value than the others, The nice thing about this lack of carbonation is that I don’t think I’ve burped once in 3.5 beers. Well, beer-adjacent drink. Between that and the lack of alcohol, this is a very polite four-pack.

This is my favorite of the flavors so far thanks to that balance between sweet and dry. Though, again, I might be drinking passion fruit.

Ah dammit, am I bad at this? 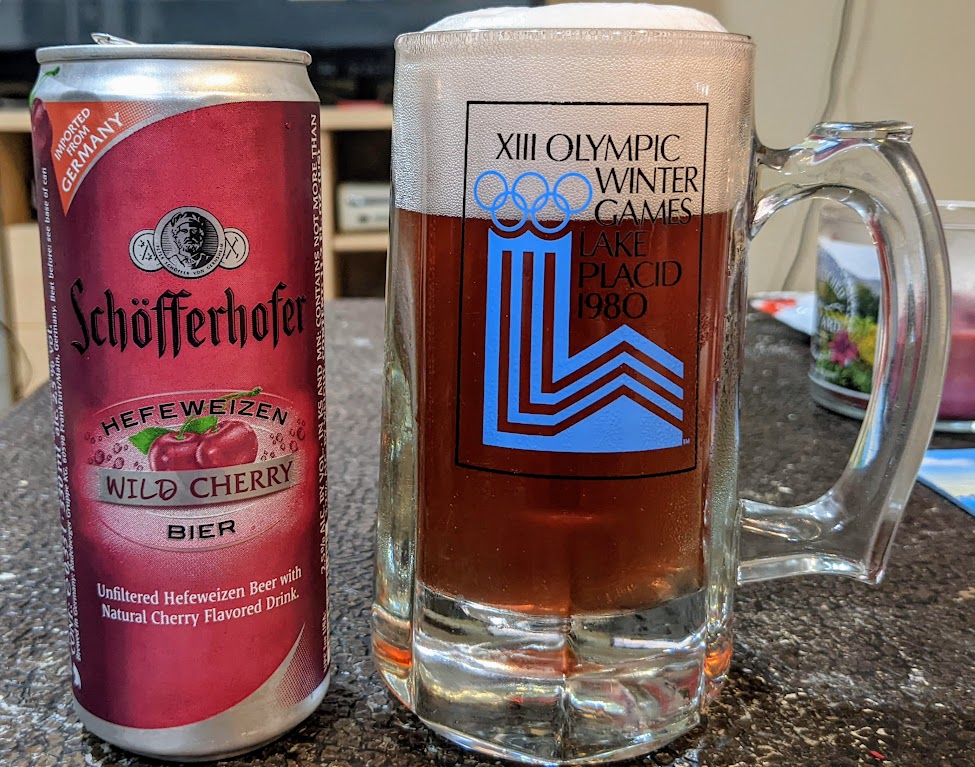 Every other beer in the non-pineapple mix pack advertises hefeweizen with juice. This one has “cherry flavored drink”. That’s some extreme summer camp cafeteria/off-brand bug juice vibes.

There’s no fruit punch taste here. Just the artificial, slightly-boozy lingering taste of cough syrup. A few years back I made a big jug of skippy with beer, lemonade, and vodka — only I dumped in a bottle of cherry Stolichnaya that was marked down to $5. It was…pretty bad. This tastes a lot like that, only without the added comfort of knowing it will at least get me drunk.

Wild cherry tastes like someone tried to make wine from a Kool-Aid packet. I’m bummed to end this review on a sour note since four of the five flavors were very good. Schöfferhofer lives up to the promise of a German radler, creating a refreshing brew that won’t leave you tipsy. While I would have liked a little more beer flavor (and, in general, more beer period) this is a solid option to fill a cooler on a summer day.