This is not a vegan-friendly blog. Apologies, but Wednesday, July 6 is National Fried Chicken Day and it’s a day that deserves celebration because around the world, fried chicken is one of the most eaten and celebrated dishes.

Apparently, the roots of fried chicken are both hotly debated and proof that getting one version of history neglects that people met each other and traveled before Europeans wrote it down. I know, shocking and thrilling. There was history before the “history” we’ve been force fed.

Scottish Immigrants and the people of west africa both have long documented history with the frying of chicken and a shared history in the enjoyment of said chicken in the Southern states of the USA, where the recipes for this chicken grew and became both myth and legend. There is also history that suggests chicken was being fried in Ancient China and the Middle East. Wherever fried chicken showed up in human history, it’s popularity never wanes. In Japan, eating fried chicken has become a holiday tradition.

I guess the question should be what qualifies as fried chicken. The answer is simple: fried chicken as we know it, is a slice of heaven that involves breading and seasoning pieces of chicken and deep frying them in some form of fat or oil. Southern fried chicken, and recently the rise of Korean fried chicken (influenced by the aforementioned Southern version thanks to Black GIs during the Korean War), are enjoyed by folks from the palaces of the world to the streets. Fried chicken is truly one of the great food equalizers.

Locally, where to get the best fried chicken is always, always a hot debate. Some prefer a local brand, some prefer a chain, and even many folks would rather get it from grandma or make it themselves.

“I’ve never eaten fried chicken in a restaurant that tastes as good as you can make it at home, if you know how,” said local attorney Stephanie Willis.

Of course, LEO asked for a few opinions about where to get the best fried chicken locally and here are some of the suggestions. 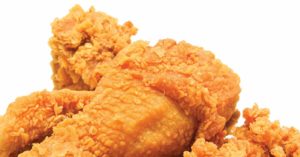 This Southern-Style Eatery was highly recommended by those asked about their favorite chicken places. The restaurant serves fried chicken, fried shrimp and fish but a host of other sides inspired by Southern soul food.

“Chicken King, Indi’s, and King’s are the best if you like spicy chicken and takeout” -Tracey Stewart.

“I’m not a bird eater but the winner is Chicken King. The potato wedges and other sides are perfect, don’t notice.” -Writer and Salon.com Editor-in-Chief Erin Keane.

“Chicken King on Broadway. All other answers are incorrect. Shirley Mae’s is the best for whole huge wings though.” -Judge Julie Kaelin

A restaurant that feels like a speakeasy. You enter through the side of a building for palate-pleasing delights and diet busters. Black-owned Southern Soul food for real and you can watch it being prepared just like you could at grandma’s house.

“Shirley Mae’s is worthy. And yes, Chicken King vs Indi’s. I call it a tie.” -Food Critic Robin Garr.

Indi’s is an old school, local chicken place with excellent wedges, yams and greens. Popular for its spicy chicken and wedges. Despite controversy a few years ago, Indi’s remains very popular amongst local chicken heads (ok, I mean chicken eaters.)

“I’m with Erin on Chicken King! But it’s a close second to Indi’s. They have better wings IMO. And I am from Buffalo and all. ” -Design Educator and Marketing professional Candace Jaworski.

If it looks like a place you shouldn’t be, it is probably a guarantee that the food inside is exactly what you want to eat. The infamous hole-in-the-wall, local vibe is often the best place for good eats and Chicken House is one of these places but nicer on the inside than the outside leads you to believe. Grandma’s kitchen is frying up goodness inside.

“Chicken House in Sellersburg! Great little joint that does Chicken really well! The new owners have expanded. I am happy for them, but selfishly upset that everyone else knows how good it is!” -Chief Marketing Officer SoIN Tourism.

Oh, The Eagle has good fried chicken but whether it is the best chicken locally is a hot debate. The chain is not locally owned but it is popular amongst locals and the location in the Highlands is a great place to sip a cocktail on a nice patio.

“It’s indisputably The Eagle for me. They bring their bird for several days and it’s so distinct. The only thing better I’ve ever had is Willie Mae’s – NOLA” -Real Estate Guru Zach Fry

Also, enjoy this “not horrifying at all” ad from KFC:

Keep Louisville interesting and support LEO Weekly by subscribing to our newsletter here. In return, you’ll receive news with an edge and the latest on where to eat, drink and hang out in Derby City.