And the “fab five” kept a diary of their meanderings and published a book that ignites the soul as well the sole (to go, go, go and retrace their steps!).

Gloria Pilar Aguirre, Nanette Olivares, Frances Pascual, Concepcion Poblador and Maria Lourdes de Vera were and are indeed privileged — to have lived in the time their school’s founder Marie Eugenie Milleret of the Religious of the Assumption (canonized in 2007) and to have traced her footsteps and carriage rides in the places where she laughed, loved and resolved to help transform the world through education and “fidelity to duty.”

And in between Masses, reflections, and enlightening realizations, these five Old Girls also smelled the roses, stumbled on unforgettable restaurants on roads less travelled, found the original recipe for Quiche Lorraine, discovered the best places to have oysters and escargot, and revealed in museums. “Sinful,” so to speak, simple pleasures.

In the book, these pious pilgrims give tips on how to exit a restaurant with dignity after you’ve settled in and discovered that the prices on the menu are astronomical; or gain access to historic churches with winding queues. Spoiler: Simply tell the doorkeeper: “Je vais entendre la messe.” It was the truth for them, anyway. 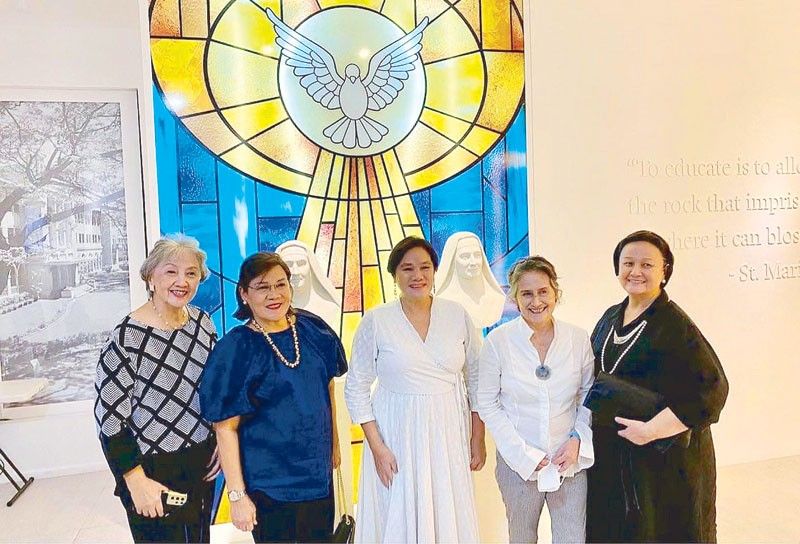 “A pilgrim’s staff and a formal itinerary we had none,” the fab five recall.

“We visited the places where (St. Eugenie’s) journey took her — where she was born and baptized, raised and summered, studied and played; the different places in Paris where the congregation was conceived and was nurtured, the churches where she prayed for clarity and sought answers to the doubts in her heart de ella. ”

And, first and last, they paid their respect at their school’s beloved founders’ shrine in the chapel at Auteuil.

“In tracing her footsteps, our eyes and soles randomly absorbed streets and quarters revealing a special history, unfolding subtle facets and contrasting portraits that may have figured in our saint’s journey.”

And through their meanderings, “(St. Marie Eugenie’s) spirit presides over our reflections on unexpected byways, and leads us to a place found only within ourselves.”

Marie Eugenie was a tireless traveler herself. As recounted in the book, she went by coach and train to Rome, to Nice, to Sedan, to Rheims, to Poitiers and to Cannes to live and spread the Gospel. Members of her congregation de ella have reached the shores of many countries, including the Philippines, and have established schools that have in turn yielded exceptional students and alumnae. Marie Eugenie passed away in March 1898, was beatified in 1974 and canonized in 2007.

In her shrine in Auteil is a portrait of her. The five Old Girls who traced her journey de ella say, “Her loving gaze de ella lingers, and ella with tenderness ella implores: ‘Dare to be holy’.” The shrine in Auteuil where St. Marie Eugenie is buried.

The book was recently launched at the Assumption College (AC) in San Lorenzo Village in Makati. Since this year also marks the 75th year of bilateral ties between the Philippines and France, officials from the French Embassy in Manila and the Alliance Francaise were present.

The event was co-emceed by Tata Poblador and French cultural attaché Martin Macalintal.

(Those interested in the book may text 0917-8120046. A similar tour “8 Days with St. Marie Eugenie” is also being organized by popular request, and is due to depart in September with Fr. Robert Bueconsejo SJ as spiritual director.)